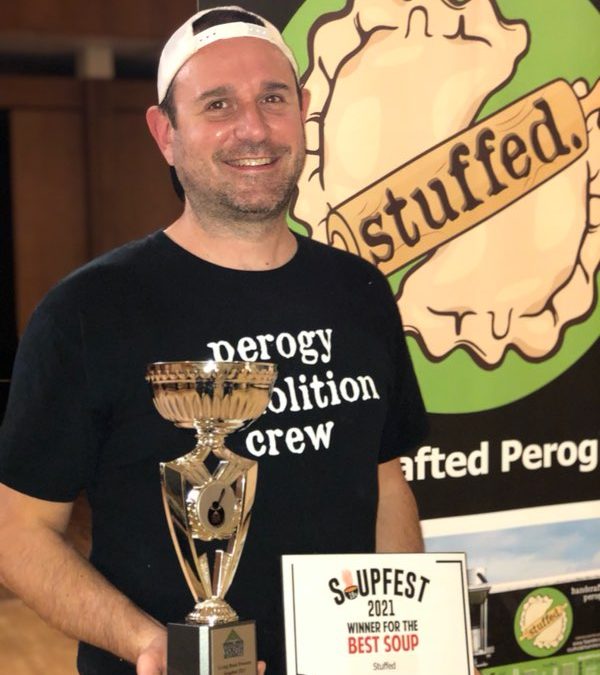 Stuffed’s head chef Michael Schmidt shows off his heavy hardware after earning the honour of Best Soup at this year’s instalment of SoupFest. – Stuffed photo

Bacon and mushroom proved to be a winning combination at this year’s SoupFest.

Waterdown’s Stuffed took home the top prize for best soup and was the runner up for most creative soup in the annual competition that is Living Rock’s largest fundraiser.

The annual fundraiser, which typically sees restaurants compete for top honours in a number of categories at an event held at the Hamilton Convention Centre, had to tweak its format this year due to the COVID-19 pandemic.

Held from Jan. 29 to Feb. 15, the 2021 instalment was held at individual restaurants, where chefs served up their soups by the spoonful to hungry patrons. There were about 19 vendors from Burlington, Hamilton and Dundas participating in this year’s SoupFest, which saw restaurant-goers cast their ballot for their favourite online.

The change in format, said Stuffed’s Michelle Schmidt, “made it a little bit challenging as well because people had to go to more than one location if they wanted to try them.”

Since Stuffed doesn’t have a physical restaurant location, the crew set up shop at the Royal Canadian Legion’s Dundas branch, where they offered their winning recipe during weekly Friday night dinners.

The winning soup is versatile, explained Schmidt. It can be enjoyed on its own or used as a sauce for pasta, schnitzel or perogy.

The winners of this year’s SoupFest were announced on social media. Learning the Stuffed had won in the best soup category made for an exciting time in the kitchen for head chef Michael Schmidt, who was working when he received the news.

“Somebody had texted him saying congratulations and he’s like ‘What?’” said Schmidt of her brother’s initial reaction. “He looked it up and he was grinning from ear to ear.”

Earning top honours has provided the family-run operation an opportunity to grow and spread the brand further afield. And Stuffed is prepared to defend its title at next year’s event.

Julia Lovett-Squires is a reporter and photographer with the Flamborough Review who has her finger on the artistic pulse of the community. Reach her at jlovett@flamboroughreview.com.