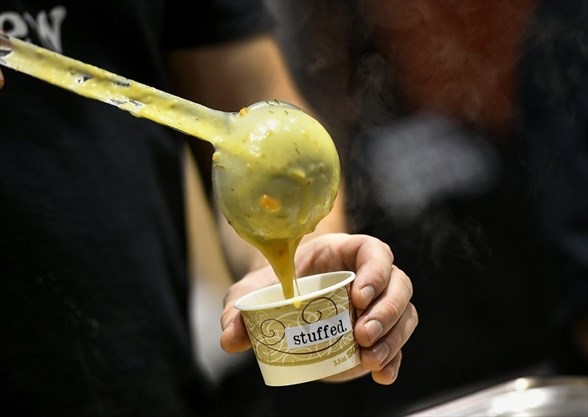 by Barry Gray  The Hamilton Spectator

For nearly two decades, Soupfest has helped raise funds for at-risk youth, one delicious sample at a time.

This year’s event, held once again at the Hamilton Convention Centre, brought 20 local restaurants together in a battle for soup bragging rights.

Hundreds of guests filtered through the facility during the day, tasting the various offerings and voting for their favourites in categories including Best Soup, Tastiest Heart Smart Soup, Best Display, and Most Creative Soup.

The event was the brainchild of Living Rock Ministries founders Alan and Karen Craig. Begun in 1985, Living Rock offers youth a safe place in the community, as well as support, education and other services. For some youth, like Victoria, Living Rock saved her.

Victoria, 28, left home when she was 13. With no place to go, she found herself at Living Rock. Eventually, she began to take advantage of what they had to offer, from the simple act of getting clothes to having a shower. She began to volunteer at their food bank, and help other youth with their own struggles.

Victoria, now an ambassador for Living Rock, credits them ultimately for her education. “They actually got me to graduate school by giving me incentives; I said I was never going to graduate, and sure enough I did.”

This year’s Soupfest hoped to raise $95,000 to allow their important work to continue.